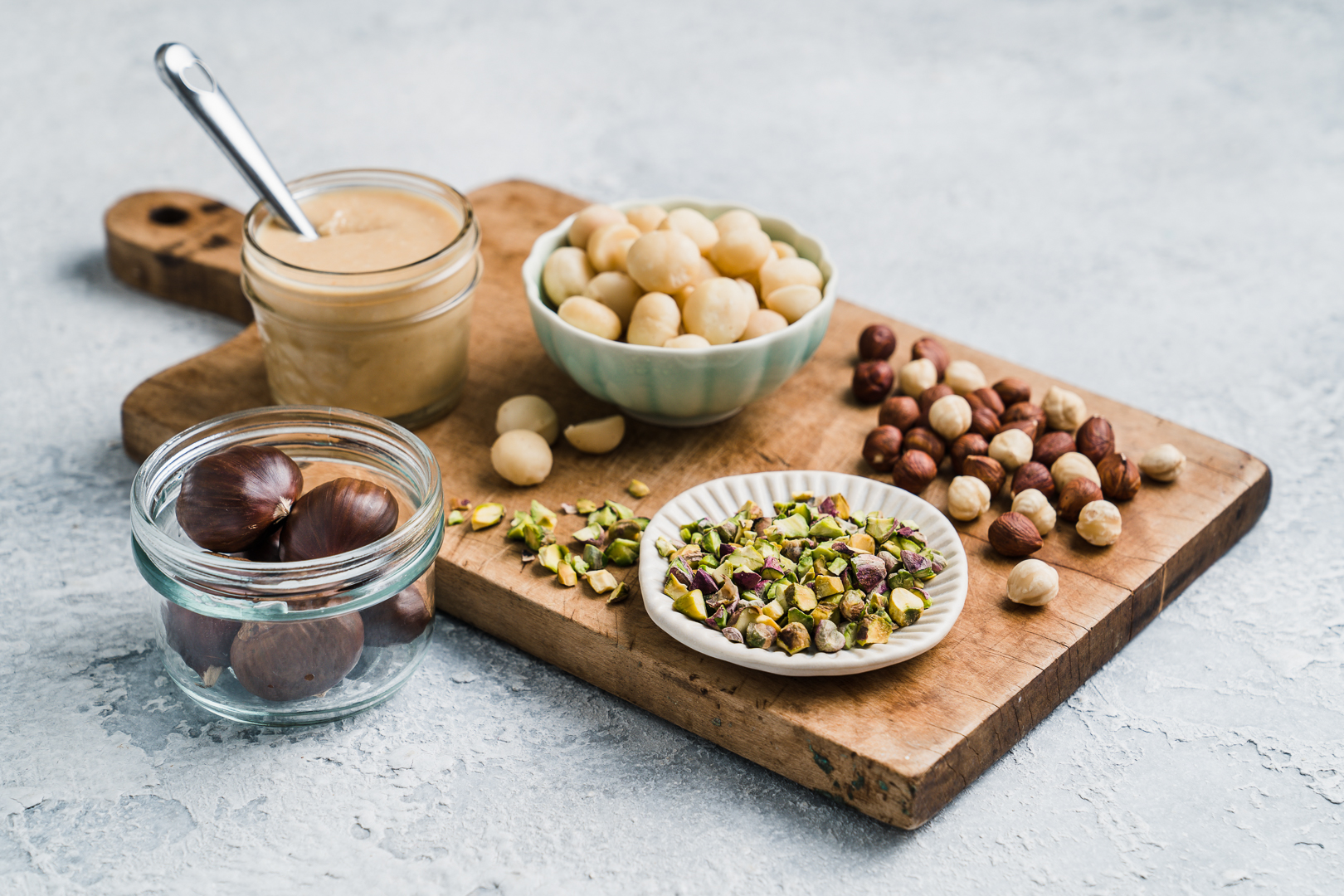 The body of evidence about nuts and brain health continues to grow, with new local and international research papers regularly published.

Nut consumption for cognitive performance: A systematic review. (2020).
This review looked at the link between nut intake and cognitive performance. Twenty-two studies, involving 43,793 adults, were included in the review. The researchers found a lack of consistency across the studies when it came to study design, the types of nut used, and the cognitive outcomes measured. As a result, they concluded that, to date, the evidence is inconsistent when it comes to nut consumption having a protective effect on cognition. They found that studies targeting populations with a higher risk of cognitive decline tended to have a more favourable outcome.

Diet and the risk of unipolar depression in adults: a systematic review of cohort studies. (2013)
A diet rich in folate, omega-3 fatty acids, olive oil, fish, fruits, vegetables and nuts may have a protective effect against depression, although the evidence is currently insufficient to establish an independent protective role for nuts alone.

Associations between nut intake, cognitive function and non‐alcoholic fatty liver disease (NAFLD) in older adults in the United States: NHANES 2011-14. (2021).
This study by Australian-based researchers found nut intake may increase cognitive performance in healthy older adults. It found cognitive scores were higher in people with a moderate intake of nuts, equivalent to 15-30g nuts daily, compared with those who didn’t eat nuts. The study involved 1,814 US-based adults aged 60 years or older, from the National Health and Nutrition Examination Surveys (NHANES) 2011-2012 and 2013-2014 cohorts. Eating more than 30g nuts/day did not lead to higher cognitive performance, compared to the moderate intake group. But higher nutrient intake and better diet quality were seen with higher nut intake.

Investigating walnut consumption and cognitive trajectories in a representative sample of older US adults. (2021).
Daily walnut consumption was linked with cognitive function at baseline in this observational study, involving 3,632 US-based adults aged 65 years and older. But walnut consumption was not associated with protection against age-related cognitive decline over time. It was, however, linked with a higher intake of nutrients identified to have neuroprotective benefits. This was a secondary analysis of the Health and Retirement Study and Health Care and Nutrition Study.

Nuts and older adults’ health: A narrative review. (2021).
This review collated the findings from past studies which looked at the effects of nuts on age-related diseases. Specifically, the researchers considered the potential for nut consumption to effect telomere length, sarcopenia, and cognitive function – all major markers for age-related conditions. Based on data to date, they suggest that nut consumption, especially when part of a healthy diet or over a prolonged period, is linked with positive outcomes, such as longer telomere length, reduced risk of sarcopenia and better cognition. But further longer-term intervention studies are needed.

Effects of daily almond consumption for six months on cognitive measures in healthy middle-aged to older adults: A randomized control trial. (2021).
This randomised controlled trial looked at the impact of almonds on cognition in healthy, middle-aged/older adults (50–75 years). Subjects were assigned to either: 1.5 oz/d almond, 3 oz/d almond, or 3.5 oz/d snack (control group). Serum analyses for tocopherols, oxidative status and inflammation, and cognition were assessed at baseline, and 3 and 6 months later. At 6 months, alpha-tocopherol concentrations increased by 8% in the 3 oz almond group, but did not increase in the other groups. There was no change over time in cognitive function among the groups. But there was a significant improvement in some cognitive measures in the 3 oz/d almond group at 6 months. Note: 3 oz equates to around 85g.

Mediterranean diet, Alzheimer disease biomarkers and brain atrophy in old age. (2021).
This study found that higher adherence to a Mediterranean diet may help prevent the build-up of amyloid protein and tau protein, which are linked with Alzheimer’s disease. It may also result in larger grey matter volume and better memory. The researchers say their findings corroborate the view of a Mediterranean diet as a protective factor against memory decline and mediotemporal atrophy. They propose that the risk of developing Alzheimer’s may be reduced by incorporating more elements of the Mediterranean diet into daily diets. The study involved 512 older adults (mean age: 69.5±5.9 years) – some at a higher risk of developing Alzheimer’s disease, while others were classed as ‘cognitively normal’.

Consumption of dietary nuts in midlife and risk of cognitive impairment in late-life: the Singapore Chinese Health Study. (2020).
This prospective cohort study looked at data from 16,737 participants in the Singapore Chinese Health Study. Intake of nuts was assessed at 45–74 years old (mean age = 53.5 years), and cognitive function at 61–96 years old (mean age = 73.2 years). Cognitive impairment was found in 2,397 people. Compared with those who consumed <1 serving/month of nuts, participants who consumed ≥2 servings/week had a 21% lower risk of cognitive impairment. This was partly mediated by unsaturated fatty acid intake.

Plant-based diets for healthy ageing. (2020).
Kahleova H. et al. Modulating lifestyle risk factors and adopting healthful diets are powerful tools that may delay the aging process, decrease age-associated co-morbidities and mortality, and increase life expectancy – plant-based diets can slash the risk of developing metabolic syndrome and type 2 diabetes by about 50 percent, and may cut the risk of developing Alzheimer’s disease by more than 50 percent.

Effect of a 12-Week Almond-Enriched Diet on Biomarkers of Cognitive Performance, Mood, and Cardiometabolic Health in Older Overweight Adults. (2020)
Coates A. et al
This study examined supplementing habitual diets with almonds or carbohydrate-rich snack foods (providing 15% energy) on biomarkers of cardiovascular and metabolic health, mood and cognitive performance. The inclusion of almonds in the diet improves aspects of cardiometabolic health without affecting cognitive performance or mood in overweight/obese adults.

Beneficial Effects of Walnuts on Cognition and Brain Health. (2020)
Chauhan. A. et al.
Researchers from the New York State Institute for Basic Research in Developmental Disabilities investigated in this field and suggested that a diet supplemented with walnuts (1-2 oz per day) may help reduce oxidative stress by decreasing the generation of free radicals and by boosting antioxidant defence. Also, evidence from animal and human studies suggests that dietary consumption of walnuts may help improve cognitive function (brain health) and may also reduce the risk of other diseases, such as cardiovascular disease, depression and type 2 diabetes, which are risk factors for the development of dementia.

Habitual Nut Exposure, Assessed by Dietary and Multiple Urinary Metabolomic Markers, and Cognitive Decline in Older Adults: The InCHIANTI Study. (2020).
This study showed that a high intake of nuts may help protect older adults from cognitive decline. A total of 119 participants aged 65 and over were selected from the InCHIANTI cohort. Participants were selected based on their nut intake: non-nut consumers and regular consumers (approx. 28g/week). Researchers found that nut consumption estimated either by dietary marker or urinary marker model was associated with lower cognitive decline.

Consumption of Nuts at Midlife and Healthy Aging in Women. (2020).
Results of this research showed a significant association between the consumption of nuts and healthy aging at midlife, and a greater likelihood of overall health and well-being at older ages. Walnuts appeared to have the strongest relation to healthy aging. The findings support the notion that long-term nut consumption merits as a strategy contributing to a healthier lifespan.

Effect of a 2-year diet intervention with walnuts on cognitive decline. The Walnuts And Healthy Aging (WAHA) study: a randomized controlled trial. (2020).
Walnut supplementation for 2 y had no effect on cognition in healthy elders. However, brain fMRI and post hoc analyses by site suggest that walnuts might delay cognitive decline in subgroups at higher risk.

Promising results for walnuts in delaying cognitive decline – The Walnuts and Healthy Aging (WAHA) study: a randomized controlled trial
Although walnut supplementation had no effect on cognition in healthy aging adults, MRI results suggest that walnuts might delay cognitive decline in subgroups at higher risk. These encouraging but inconclusive results warrant further investigation, particularly targeting disadvantaged populations, in whom greatest benefit could be expected.

Maternal nut intake in pregnancy and child neuropsychological development up to 8 years old: a population-based cohort study in Spain. (2019).
In the first of its kind, a study led by the Barcelona Institute for Global Health found children, whose mothers ate more nuts during the first trimester of pregnancy, achieved the best results in tests measuring cognitive function, attention capacity and working memory.

A Prospective Association of Nut Consumption with Cognitive Function in Chinese Adults aged 55+ China Health and Nutrition Survey. (2019).
Eating more than 10g of nuts a day may improve thinking, reasoning and memory, and keep age-related mental disorders at bay. The study by researchers from the University of South Australia was conducted on over 4,000 Chinese adults aged over 55 years.

Nut consumption and age-related disease. (2016).
Nuts show promise as useful adjuvants to prevent, delay or ameliorate a number of chronic conditions in older people. Their association with decreased mortality suggests a potential in reducing disease burden, including cardiovascular disease, cancer, and cognitive impairments.

The Mediterranean diet impact on prevention and treatment of cognitive decline. (2017)
A healthy Mediterranean diet (MeDi), rich in fruit, vegetables, whole grains, nuts, olive oil, and fish may be neuroprotective. Greater adherence to the MeDi is associated with slower rate of cognitive decline and lower risk of cognitive impairment and dementia, but findings are conflicting, mainly due to significant heterogeneity between studies in terms of populations studied and methods used to assess diet and cognition.

Cognition: the new frontier for nuts and berries. (2014).
Regular nut consumption, berry consumption, or both could possibly be used as an adjunctive therapeutic strategy in the treatment and prevention of several neurodegenerative diseases and age-related brain dysfunction. A number of animal and a growing number of human studies show that moderate-duration dietary supplementation with nuts, berry fruit, or both is capable of altering cognitive performance in humans, perhaps forestalling or reversing the effects of neurodegeneration in ageing.

Dietary patterns: a new therapeutic approach for depression. (2018).
Most studies showed an inverse association between healthy dietary patterns, rich in fruits, vegetables, lean meats, nuts and whole grains, and with low intake of processed and sugary foods, and depression and depressive symptoms throughout an array of age groups, although some authors reported statistical significance only in women.

Food patterns and the prevention of depression. (2016).
According to large and well-conducted observational studies, food patterns potentially associated with reduced risk of depression are those emphasising seafood, vegetables, fruits and nuts. 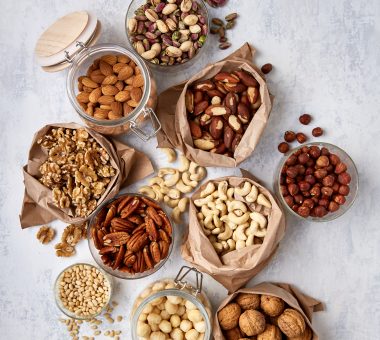 Burden of disease: Why we need to eat more nuts, seeds, grains and fruit

A diet low in nuts and seeds has a bigger impact on disease burden than a diet low in vegetables,… 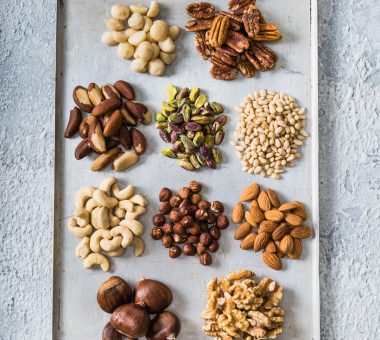 We all know that raw (natural) nuts are a great everyday food. But what about roasted nuts? Is roasting nuts… 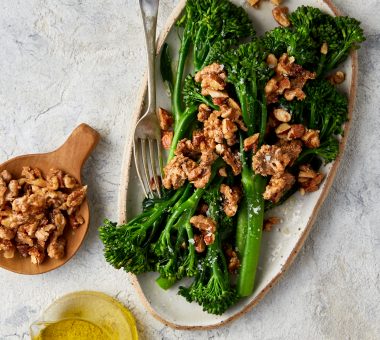 In good news for nut lovers, growing research in the area of nuts and cancer suggests that nut consumption may…