The gut microbiome (the community of different bacteria in the intestine) is an increasingly popular area of study among researchers and is now believed to impact on the development of chronic diseases, such as obesity. It is estimated that around 100 trillion micro-organisms colonise the gut, which are thought to alter in type and amount depending on our age, gender, genetics, weight, health status, diet and medications such as antibiotic use. Whilst evidence is emerging, there is still much that we have yet to understand about the microbiome.

Many foods impact on the amount and diversity of bacteria, one of which is nuts.

Here’s what we understand about the role nuts play…

Preliminary research suggests nuts could be good for gut health, which adds to the large body of evidence on how nuts improve health and wellbeing.

It is thought that nuts, and more particularly nut skins could benefit gut health due to their high fibre and polyphenol levels, with antioxidant and anti-inflammatory properties.

Nuts act as ‘food’ for the gut bacteria

Nuts are foods (prebiotics) for the bacteria (probiotics) and nut skins in particular, appear to play an important role since they are rich in fibre and polyphenols, with antioxidant and anti-inflammatory properties [1]. Studies conducted with almonds [2] and pistachios [3] have reported increases in the growth of beneficial bacteria leading to increased butyrate – a short chain fatty acid (SCFA)  – which is thought to keep colon cells healthy.

A study conducted by Blaiotta et al [4] found chestnut extract and chestnut flour help different strains of lactobacilli bacteria to survive stomach acids and bile. This means they are more likely to make it to the large intestine intact where they do their good work.

Research has shown that those who regularly consume nuts are less likely to be overweight or obese [5]. Whilst we don’t have all the answers yet, one mechanism of why this is, is thought to have something to do with the healthy bacteria and the compounds they generate which can impact weight control. And as nuts can both feed and protect bacteria, they may play a role.

Short chain fatty acids are produced when healthy bacteria feed on fibre, and these compounds may play a role in weight management by influencing hormones in the gut that make us feel full and making the body more sensitive to insulin [6-8]. High levels of insulin are associated with weight gain.

Research also shows that people with greater diversity of intestinal bacteria and higher levels of specific bacterial strains (such as faecalibacterium, bifidobacterium and lactobacillus) are less likely to be overweight, have less insulin resistance, and lower blood cholesterol and inflammation [6, 9, 10].

There is so much left unanswered but this new area of study offers promising results. Research to date tells us that healthy diets, including those that include nuts are important to provide sources of pre-and probiotics to positively affect the gut microbiome.

An audit of the energy, fat and sodium content of nuts

Research clearly and consistently shows that nuts are essential for good health. Yet most Australians (98% in fact), fall well…

April 2021. About this episode: Nuts are high in healthy fats and are energy (kilojoule) dense. But does this mean… 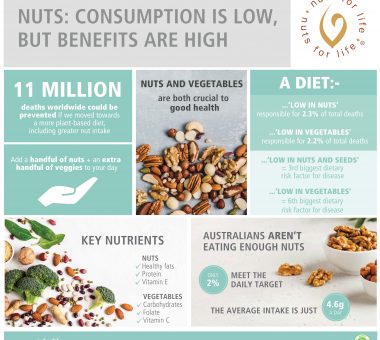 The daily habit of a handful of nuts offers some major health benefits! We’d love you to download and share…