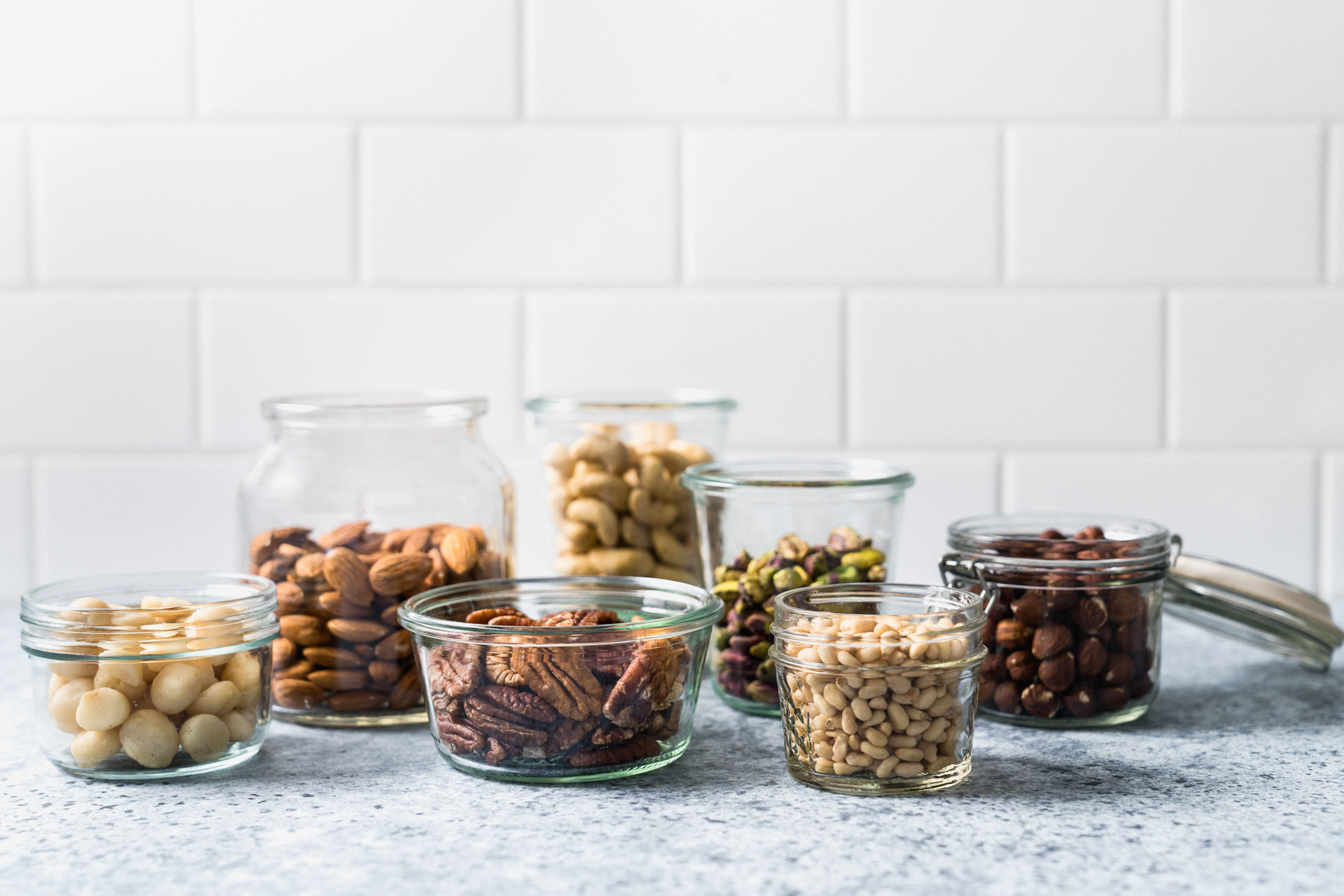 The body of evidence about nuts and weight management continues to grow, with new local and international research papers regularly published.

Are fatty nuts a weighty concern? A systematic review and meta-analysis and dose–response meta-regression of prospective cohorts and randomized controlled trials. (2021).
This systematic review and meta-analysis of six prospective cohort studies and 86 randomised controlled trials (RCTs), involving more than half a million study participants. It found nut consumption does not lead to increased adiposity. Nuts were linked with a 7% lower rate of overweight/obesity in long-term prospective cohorts, and RCTs showed a ‘high certainty’ of no adverse effect of nuts on body weight. The researchers conclude that “the concern that eating nuts contributes to increased adiposity appears unwarranted”.

Nut consumption, body weight, and adiposity in patients with type 2 diabetes: A systematic review and meta-analysis of randomized controlled trials. (2021).
The review paper, which collated the outcomes of 15 randomised controlled trials involving 899 people, found nut consumption has no effect, positive or negative, on body weight in people with type 2 diabetes. It also found no significant effects of nut-enriched interventions on body mass index, waist circumference or percent body fat. It backs up previous research that nut consumption does not lead to weight gain in the general population.

The relationship of tree nuts and peanuts with adiposity parameters: A systematic review and network meta-analysis. (2021)
This network meta-analysis and systematic review considered 105 randomised controlled trials. All of these previous studies had looked into how tree nuts and peanuts impact adiposity-related measures. It found that no type of nut increased body weight, body mass index, waist circumference (WC), or body fat percentage (except for hazelnuts with WC). The researchers conclude that fear of weight gain is the most common barrier to regular nut consumption, but this concern is not backed by scientific evidence.

Intake of nuts or nut products does not lead to weight gain, independent of dietary substitution instructions: A systematic review and meta-analysis of randomized trials. (2020).
This analysis found that nuts may be consumed, even in large amounts, without changes in body weight (BW) or body composition. The researchers looked at 55 nut feeding trials, involving more than 3,800 adults. Some of the studies included substitution instructions (for example, guidance on what to remove from the diet to compensate for adding nuts in) and some did not. They concluded that nut consumption does not result in changes in BW, body mass index or waist circumference in studies with or without substitution instructions.

Effect of nuts on energy intake, hunger, and fullness, a systematic review and meta-analysis of randomized clinical trials. (2020).
In conclusion, pooled estimates of available clinical trials showed increased energy intake following nut consumption in overweight/obese individuals but not in persons with normal weight. Nut consumption was associated with decreased hunger but no effect was observed on fullness and weight.

Nut consumption, weight gain and obesity: Epidemiological evidence. (2011).
Consumption of nuts was not associated with a higher risk of weight gain in long-term epidemiologic studies and clinical trials.

Changes in body weight in response to pecan-enriched diets with and without substitution instructions: A randomised, controlled trial. (2022).
This was an 8-week randomised, controlled trial with three treatments – a nut-free control group, and two pecan groups (an ADD group, that added 68g/day of pecans into their usual diet, and a SUB group, where 68g/day of pecans replaced other foods which would have contained the same amount of kilojoules). Body weight and total body fat percentage were measured. It found that daily pecan consumption for 8 weeks did not result in significant weight gain in either the ADD or the SUB groups.

Effects of whole peanut within an energy-restricted diet on inflammatory and oxidative processes in obese women: A randomized controlled trial. (2021).
In this trial, 24 women with obesity were assigned to 3 groups: 56g of whole peanuts (WP), 56g skinned peanuts (SP), and no peanuts (NP), along with energy-restricted diets (250 kcal/day less than their usual diet) for 8 weeks. WP lost an average of 3.2 kg, while SP group lost 2.6 kg and the NP group 1.8 kg. However, only the groups that consumed peanuts showed a significant reduction in BMI. There was a also a significant reduction in total cholesterol and LDL-cholesterol after four weeks of intervention, which was maintained at 8 weeks for the peanut groups. In addition, there was an improvement in platelets and plasma homocysteine in the WP group.

Pecan-enriched diets increase energy expenditure and fat oxidation in adults at-risk for cardiovascular disease in a randomised, controlled trial. (2021).
This randomised controlled trial looked into the impact of daily pecan consumption for 8 weeks on energy metabolism in 47 adults with high cholesterol or at higher risk of cardiovascular disease. Study participants were randomised into one of three treatments: a nut-free control group, and two pecan groups (an ‘ADD’ group that added pecans in their diet, and a ‘SUB’ group which substituted the pecans for isocaloric foods from their habitual diet). It found daily consumption of pecans may increase certain measures of energy expenditure (including resting metabolic rate, and post-prandial diet-induced thermogenesis) and fat oxidation.

Dietary patterns characterized by fat type in association with obesity and type 2 diabetes: A longitudinal study of UK Biobank participants. (2021).
This study, by Australian-based researchers, looked into links between dietary patterns (with varying proportions of SFAs, MUFAs or PUFAs) and obesity, abdominal obesity, and type 2 diabetes. It used data from more than 16,000 adults, aged 40-69 years, in the large UK Biobank cohort. Study participants were followed for an average of six years, to understand if different dietary fats, within the context of an overall diet, led to different weight outcomes. It found a dietary pattern characterised by higher SFA foods was associated with obesity and abdominal obesity incidence (but not type 2 diabetes). Whereas people eating a diet higher in unsaturated ‘healthy’ fats, from foods like avocado, nuts, seeds and olive oil, were less likely to put on weight as they aged, even though their kilojoule intake was similar.

Mixed tree nut snacks compared to refined carbohydrate snacks resulted in weight loss and increased satiety during both weight loss and weight maintenance: A 24-week randomized controlled trial. (2021).
This 24-week RCT involved 95 healthy adults, aged 30-68 years, with overweight/obesity. Study participants added either 1.5 oz (around 40g) of mixed nuts, or a kilojoule-equivalent amount of pretzels, to their weight loss diet (-500kJ/day) for 12 weeks. This was followed by a weight maintenance program for another 12 weeks. Both groups lost weight: 1.6kg over 12 weeks for the nut group, and 1.9kg for the pretzel group. But at 24 weeks, only the nut group maintained this weight loss. And at 24 weeks, compared to baseline, satiety was increased significantly in the nut group, compared with the pretzel group.

Effect of a nut-enriched low-calorie diet on body weight and selected markers of inflammation in overweight and obese stable coronary artery disease patients: A randomized controlled study. (2021).
This randomised controlled trial compared the effects of a ‘nut-enriched’ low-calorie diet with a ‘nut-free’ low-calorie diet, on body weight and inflammatory markers in overweight or obese adults with coronary artery disease. Sixty-seven adults took part in the eight-week study. Participants in both groups lost a similar amount of weight, confirming that eating nuts within a weight management diet can still lead to weight loss. The nut group also had improvements in some inflammatory markers (ICAM-1 and IL-6), which were not seen in the nut-free group.

Almond consumption decreases android fat mass percentage in adults with high android subcutaneous adiposity but does not change HbA1c in a randomized controlled trial. (2021).
This 6-month randomised controlled trial, involving 134 adults, found almond consumption reduced fat mass in adults with an ‘apple-shaped’ body. That is, participants with high android subcutaneous adiposity (or high ‘fat stores’ around the abdominal region) who consumed around 42g of almonds daily had a greater percentage loss of android fat mass, compared to a control group. Participants consuming almonds ingested 195±87 kcals/day more than those in the control group, but this did not result in any differences in body weight. At six-months, there were no differences in HbA1c between the two groups.

Effects of cashew nut consumption on body composition and glycemic indices: A meta-analysis and systematic review of randomized controlled trials. (2021).
Incorporating cashews into the diet has no significant effect on body weight or glycemic indices (fasting blood sugar, and HOMA-IR, a measure of insulin resistance), according to this study. It looked at the combined outcomes of six clinical trials, involving 521 people. Combined effect sizes revealed no effect of cashew consumption on weight, BMI and waist circumference. The findings are consistent with other research, and using different nut types, which shows nut consumption is not linked with weight gain.

The relationship between pistachio intake and adiposity: A systematic review and meta-analysis of randomized controlled trials. (2020).
This research looked at the outcomes of eleven trials, involving 1,593 subjects, to assess the relationship between pistachio intake and obesity. Compared to the group on a control diet, the pistachio diet group had lower BMI values, but there were no significant differences in body weight or waist circumference. The researchers concluded that pistachio intake lowered BMI, without increasing body weight, which supports the view that pistachio consumption is beneficial for health.

Changes in nut consumption influence long-term weight change in US men and women. (2019).
Researchers from Harvard University have analysed population studies and showed that increased nut consumption is associated with less weight gain and lower risk of developing obesity.

Association of nuts and unhealthy snacks with subclinical atherosclerosis among children and adolescents with overweight and obesity. (2019).
Participants with highest nut intake had nearly 60% lower risk of high cIMT, a marker of atherosclerosis, compared to those in the lowest tertile of nut consumption.

Metabolizable energy from cashew nuts is less than that predicted by Atwater Factors. (2019).
The average available energy content of a 30g handful of cashews is 137kcal – 16% lower than what is found on food labels. These results are in line with previous studies suggesting that the Atwater factors over-estimate the calories in nuts.

Effects of long-term walnut supplementation on body weight in free-living elderly: results of a randomized controlled trial. (2018).
Healthy adults (mean age 69 years) were randomised to receive 28-56g walnuts/day to incorporate into their usual diet or no walnuts (the control). After 2 years, no significant differences were observed between the control and walnut groups regarding body weight or body fat. Lean body mass, waist circumference, and waist-to-hip ratio remained essentially unchanged. The results indicate that incorporating walnuts does not adversely affect weight. 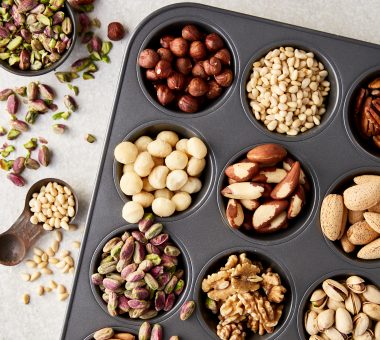 Are all kilojoules in nuts absorbed?

Nuts may provide up to 26 per cent less kilojoules than previously thought. A series of studies, from the US… 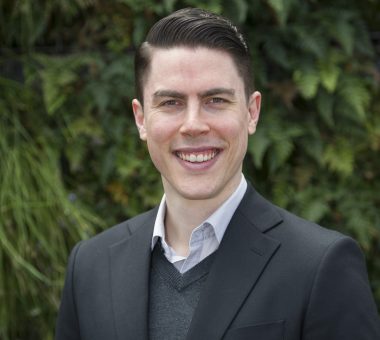 July 2022. About this episode: Just like it can the rest of our body, our lifestyle choices (including sleep, exercise… 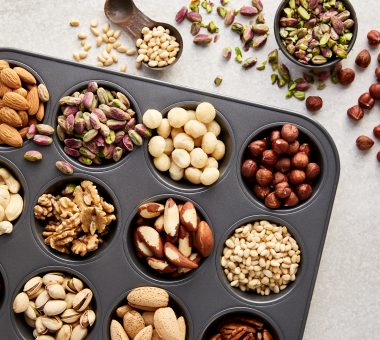